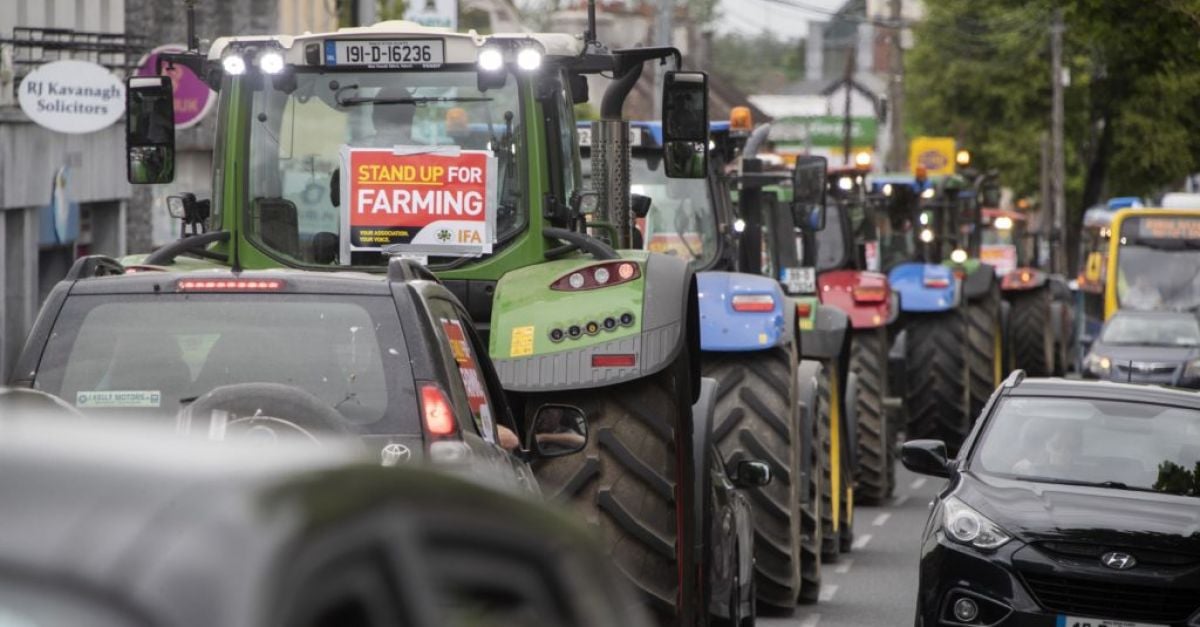 Farmers in 30 towns nationwide held a “day of action” on Friday to protest over European Union Common Agricultural Policy (CAP) reform proposals and what they claim is the detrimental impact of the Government’s climate action plan.

The protests were the first large-scale demonstration held by the Irish Farmers’ Association (IFA) since the outbreak of the pandemic last year.

The IFA said the objective of the protest was to emphasise the importance of agriculture in rural towns.

IFA President Tim Cullinan expressed his concern that the position of the Climate Action Bill and the direction of the CAP could sound the death bell for commercial farming in Ireland.

“We will be making a strong statement across the country today that policies must support our largest indigenous industry,” he said.

“A cohort of farmers, many of whom are the most productive farmers, are being hit with huge cuts under the CAP.

“In addition, the Climate Bill, the subsequent carbon budgets and sectoral targets could result in huge additional regulation being imposed on the same group of farmers. We will not accept any attempt to remove credits from our sector.”

In Cork around 30 farmers attended a “day of action” in their tractors in the town of Bandon.

Harold Kingston, who farms in Courtmacsherry in west Cork and is the IFA Munster regional chair, said farmers were anxious about the future viability of the sector.

“We are also focusing on the Climate Bill. We need to make sure that the biogenic methane – the methane produced by cows is recognised as being completely different to emissions coming from cars and industry.”

Mr Kingston said Ireland needs to stand up for its farmers.

“A third of farmers in Ireland are currently viable. A third are sustainable because of having another source of income be it a family member or themselves, and a third are vulnerable.

“What needs to be remembered is that it is not just farmers here,” he added.

“There is 300,000 jobs right across the country which are totally dependent on farmers producing a product.

“If I reduce my number of animals there is no need for Cadbury to have a certain number of staff. The butchers likewise won’t have the same amount of product.”

‘You won’t miss us until we are gone’

Meanwhile, John O’Brien who farms in Barryroe, Co Cork said farmers must have a return from their hard work in order to guarantee a sustainable future.

“There is major change coming at us very quickly from the CAP perspective. We need to be sure going forward that farmers are in a secure position,” he said.

“Farmers have to earn a living and have to have a return from their work to sustain the next generation. It is vitally important that any changes are positive and sustainable.”

It is frightening what is coming down the track for farmers

“It is frightening what is coming down the track for farmers. The thing I am grateful for is that I am as old as I am,” she said.

“Looking around at the young farmers I wouldn’t swap places with them for a second because it is getting more difficult between climate change and CAP.

“I know farmers are always grumbling. But I think that if you take farming out of a place like west Cork it is a case of you won’t miss us until we are gone. Farming is huge.

With the undercutting from supermarkets we are attacked from every side

“You have so many spin off jobs from it. It is important that we come out and try and make a statement. We do need support.

“With the undercutting from supermarkets we are attacked from every side.”

Crookstown farmer and manager of Bandon Mart, Sean Dennehy, said it is of extreme importance that farmers get the support they need.

“The way CAP is coming down the line is very environmentally motivated. There is a cost to that. We are not against bettering the environment but when there is a cost and it reduces our viability it is dangerous.”