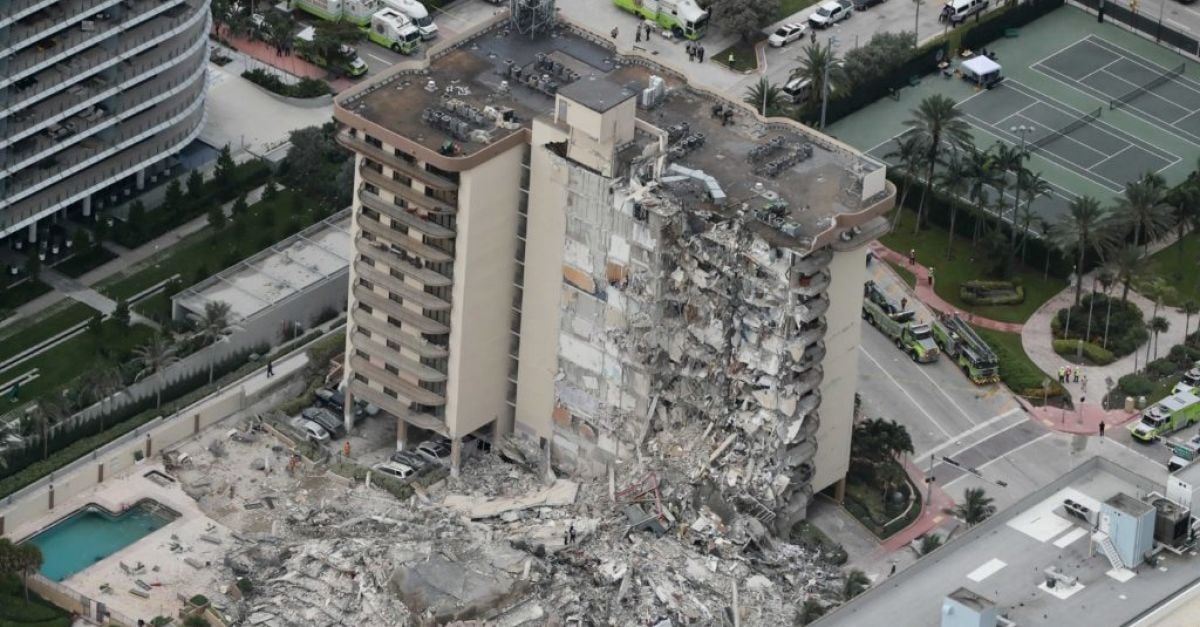 A wing of a 12-floor, beachfront condo building collapsed with a roar in a town outside Miami on Thursday, killing at least one person while trapping residents in rubble and twisted metal.

Rescuers pulled dozens of survivors from the tower in Surfside during the morning and continued to look for more.

Surfside mayor, Charles Burkett, warned that the death toll was likely to rise, saying the building manager told him the tower was quite full at the time of the collapse around 1.30am, but the exact number of people present was unclear.

“The building is literally pancaked,” Burkett said. “That is heart-breaking because it doesn’t mean to me that we are going to be as successful as we wanted to be in finding people alive.”

About half of the building’s roughly 130 apartments were affected, Miami-Dade County Mayor Daniella Levine Cava told a news conference.

Rescuers pulled at least 35 people from the wreckage by mid-morning, and heavy equipment was being brought in to help stabilise the structure to give them more access, Raide Jadallah of Miami-Dade Fire and Rescue said.

Sally Heyman, of the Miami-Dade Board of County Commissioners, told CNN that 51 people were unaccounted for — but that some may not have been in the building at the time of the disaster.

The tower has a mix of seasonal and year-round residents, and while the building keeps a log of guests staying, it does not keep track of when owners are in residence, Mr Burkett said.

Earlier, Mr Burkett said two people were brought to the hospital, one of whom died. He added that 15 families walked out of the building on their own.

Work was being done on the building’s roof, but Mr Burkett said he did not see how that could have caused the collapse. Authorities did not said what the cause may be.

Ron DeSantis, governor of Florida, said officials were “bracing for some bad news just given the destruction that we’re seeing”.

The collapse, which appeared to affect one leg of the L-shaped tower, tore away walls and left a number of homes in the still-standing part of the building exposed in what looked like a giant dollhouse. Television footage showed bunk beds, tables and chairs still left inside. Air conditioner units were hanging from some parts of the building, where wires now dangled.

Piles of rubble and debris surrounded the area just outside the building, and cars up to two blocks away were coated with with a light layer of dust from the debris.

Barry Cohen, 63, said he and his wife were asleep in the building when he first heard what he thought was a crack of lightning. The couple went onto their balcony, then opened the door to the building’s hallway to find “a pile of rubble and dust and smoke billowing around.”

“I couldn’t walk out past my doorway,” said Cohen, the former deputy mayor of Surfside. “A gaping hole of rubble.”

He and his wife eventually made it to the basement and found rising water there. They returned upstairs, screamed for help and were eventually brought to safety by firefighters using a cherry-picker.

Cohen said he raised concerns years ago about whether nearby construction might be causing damage to the building after seeing cracked pavers on the pool deck.

At an evacuation site set up in a nearby community centre, people who live in buildings neighbouring the collapse gathered after being told to flee. Some wept.

Some were still dressed in pyjamas. Some children tried to sleep on mats spread on the floor. When a news conference about the collapse appeared on the TV, the room went silent.

Jennifer Carr was asleep in a neighbouring building when she was awakened by a loud boom and her room shook. She thought it was a thunderstorm but checked the weather app on her phone and saw none. The building’s fire alarms went off, and she and her family went outside and saw the collapse.

“It was devastation,” Carr said. “People were running and screaming.”

Nicolas Fernandez was waiting on Thursday for word on close family friends who lived in the collapsed section of the building.

“Since it happened, I’ve been calling them non-stop, just trying to ring their cellphones as much as we can to hep the rescue to see if they can hear the cellphones.”

Miami-Dade Fire Rescue said in a tweet that more than 80 crews were “on scene with assistance from municipal fire departments”.

Police blocked nearby roads, and scores of fire and rescue vehicles, ambulances and police cars swarmed the area. Teams of firefighters walked through the rubble, picking up survivors and carrying them from the wreckage.

“We’re on the scene so it’s still very active,” said Sgt Marian Cruz of the Surfside Police Department. “What I can tell you is the building is 12 floors. The entire back side of the building has collapsed.”

The seaside condo development was built in 1981 in the southeast corner of Surfside. It had a few two-bedroom units currently on the market, with asking prices of about 700,000 US dollars (£500,000).

The area has a mix of new and old apartments, houses, condominiums and hotels, with restaurants and stores serving an international combination of residents and tourists.

The community provides a stark contrast from bustle and glitz of nearby South Beach with a slower-paced neighbourhood feel.